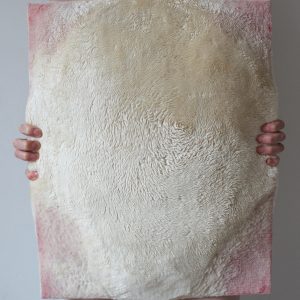 Sunday the 22th of Mai we will open the exhibition ‘The Bristle Veil’ of Elke Lutgerink.

Being a daughter of two biologists Lutgerink wonders how the world would look like it there wouldn’t be any intervenes anymore, if you let everything grow and let his own way. What if we wouldn’t try to control anything anymore?

Elke Lutgerink makes objects that emit a certain materiality. She strongly feels the need to give back to nature things created by man. “I can’t revive anything, but I can transform artificial materials to something that seems to have ever lived, or I can let artificially materials overgrow lifeless things. I’m fascinated by fungi, among others, mysterious creatures that aren’t plants or animals and all we leave behind, engulfing under a thick soft layer that seems most like plush. ”

The title refers to the boundary between human and animal, between the natural and the unnatural, the living being and the thing, and the inner and outer world. This boundary is not clearly defined, but like skin permeable, which is both beautiful and frightening at the same time. In her work Lutgerink wants to emphasize adividing line between the outer – and the inner world. Lutgerink explores a world that lies just beneath the surface of reality.