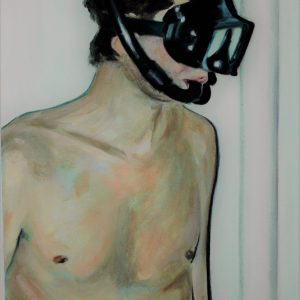 Gies Backes (1977) takes the inspiration for his paintings from his immediate surroundings. In these he is not drawn by special or deviant objects or situations, on the contrary, he is more interested in banalities. At least, that’s the way it seems. A plastic garden chair, a lit chandelier, a kerbstone,  some plastic garbage containers, a midweek caravan, a look through the window of a Chinese restaurant, a piece of flooring or a window plant. Persons rarely appear on his canvases.

This may sound boring, but Backes strives to turn this apparent blandness into something fascinating. Through the imaging of the ordinary he succeeds in telling stories. Open narratives. Stories that can be interpreted in various ways, depending on the viewer’s creativity, as well as memories and experiences. The deserted Chinese restaurant with Chinese characters on the window panes reminds one of Edward Hopper’s iconic work of “Nighthawks” of a desolate bar at night. To another this same painting may bring memories of a relaxed Chinese meal after a hard and productive day’s work. One viewer may associate the white garden chairs with a disastrous camping holiday, while another may think of a messy Ikea garden furniture department.

Gies Backes attains this narrative effect in various ways. One is his painting style. The use of a limited range of sallow colours and the somewhat vague brush strokes change reality into a suggestion of reality. You know what it depicts, but it refuses to exactly stick to that rule. It’s an interpretation. Has reality turned into a memory of itself? A romantic variant? A dream version of it?

Furthermore, he uses space. In some of his painting he expressively places his objects in space, which is not inhabited or populated by humans, although one does have the impression that the people have just left the location. He allows, as it were, the viewer to enter the work of art and become an actor on the stage. In other works he so much zooms in on the object – the floor, a kerbstone, a window – that one gets curious about the lost context, the space that has been left behind. A reversed  method of making the observer  make up their own story.

Backes uses photos as a starting point of his paintings. These photographs form a kind of sketch. Before starting on the actual painting he often makes a rough sketch of the actual photo. During the rendition of the painting he preserves room for serendipity and the sudden new idea.  Thus the distance away from his source will grow.