04|09|2022 - 08|10|2022
In the autumn of 2022, the monumental work of the German-Swiss painter Stefan à Wengen is on show at Galerie Wilms. The exhibition Animal Farm includes both recent work and work from past decades. The large paintings and charcoal drawings reveal the talent of Stefan à Wengen and give a glimpse into his impressive oeuvre.

Introduction in the work of Stefan à Wengen during the opening by Edwin Becker, headcurator of the Van Gogh Museum.

Animal Farm is the title of a famous novel by George Orwell, in which a group of animals fed up with living under the yoke of humans takes matters into their own hands. However, this ends up going very differently than imagined and it culminates in a total disillusionment. In it resounds a huge warning for totalitarian regimes, that is delivered with satire; it is a criticism of Stalinism, Nazism and … you name it.
This comparison of humans and animals is made all the time, by the way, also in the visual arts. For centuries. Just think of the so-called singeries (after the word “singe”, the French word for monkey), the paintings in which monkeys dress up and behave like humans. This was a popular subject from the 16th century onwards, peaking during the woozy period of rococo, yes, that style with bells and whistles and curls and whims in the 18th century. Frenchman Chardin, for instance, painted elegantly dressed monkeys as artists. As if he wanted to say: the artist may pompously think he is creating and creating something new, but isn’t it actually much more imitating, reproducing, copying?

That dualism between imitating on the one hand and creating on the other still echoes in a monumental work by Stefan à Wengen, here in the gallery. He is a Swiss artist who already has a huge reputation, has international exhibitions to his name and looks for inspiration in the Western and also non-Western visual tradition. The large canvas I am referring to is from his series Le Singe Peintre, in which the monkey parades on a horse as in an equestrian portrait by Velázquez or Van Dyck against a contrasting and strikingly decorative background. The third dimension of horse and rider contrasts sharply with that two-dimensional background. That is the beauty and excitement in that work, which is enhanced by the alienating effect of the use of colour. But it is not only the more frivolous side that is highlighted in Stefan’s work: in a number of other canvases, a melancholic and mysterious side emerges, as we know from his architectural and landscape works, with a penchant for an eerie, almost spooky atmosphere. Just look at the unyielding rhinoceros! In acrylic paint, but also especially in charcoal. One lump of massiveness, but what a beautiful skin, not only literally but also in terms of technique: that depth and layering. Juxtaposed against the playfulness of the other work, it has an aura like a monument.

I would also like to refer to an underlying source of inspiration: a woodcut by the 16th century artist Dürer. However, where the rhinoceros in Dürer’s work was still a conjecture – after all, Dürer had never seen the animal himself, he only knew it by hearsay and from a number of vague sketches – Stefan’s rhinoceros is (at least you think so) much more realistic. But appearances are deceptive and therein lies the strength of the work: the skin you can almost feel is perhaps most important, as is the imposing impact, the calm and resignation. You can project your own feelings and emotions into this much more. In doing so, Stefan lifts you out of reality as he so often does and brings you into his world: that of dream and illusion, far from reality.
As an aside, the rhino is hot. A fine presentation on the theme of Clara the Rhinoceros opens at the Rijksmuseum in Amsterdam at the end of this month: this Indian rhinoceros was a real attraction, a phenomenon, in the mid-18th century, and the Dutchman Douwe Mout van der Meer dragged her around Europe on a year-long tour.

The animal is Stefan’s starting point, certainly, but here, no colourful parade, no picturesque details; rather, an introverted mood and depth in all respects. This can be seen in the large-format charcoal drawing of the cassowary: a large Australian bird that still has something of a primal shape, rendered with powerful lines and a pronounced contrast between light and dark. The introversion and depth is also reflected in the undulating movements of a jellyfish, which on the one hand dances gracefully across the canvas and on the other has something emblematic because of its size: almost like a universal symbol of grace and movement.
Even the smaller paintings, in which cows and horses are transformed into spindly rocking horses as in a religious triptych, are anything but frivolous or trivial. It puts us on edge to reflect on the way we look at animals. On how our gaze is coloured and how we mostly cherish the cuddly and pampering aspect of animals. While they prefer to be in their natural environment, far away from our destructive “civilisation”. In the absence of an environment, of a context, they transcend the temporal and become timeless beings that continue to fascinate us. Especially in the way Stefan à Wengen portrays them: with deep respect and at the same time with an enormous dose of aesthetics.

That is why the term “beastly beautiful” is appropriate here, as an exhibition on animals in art at the Van Gogh Museum once read, or in German: tierisch schön 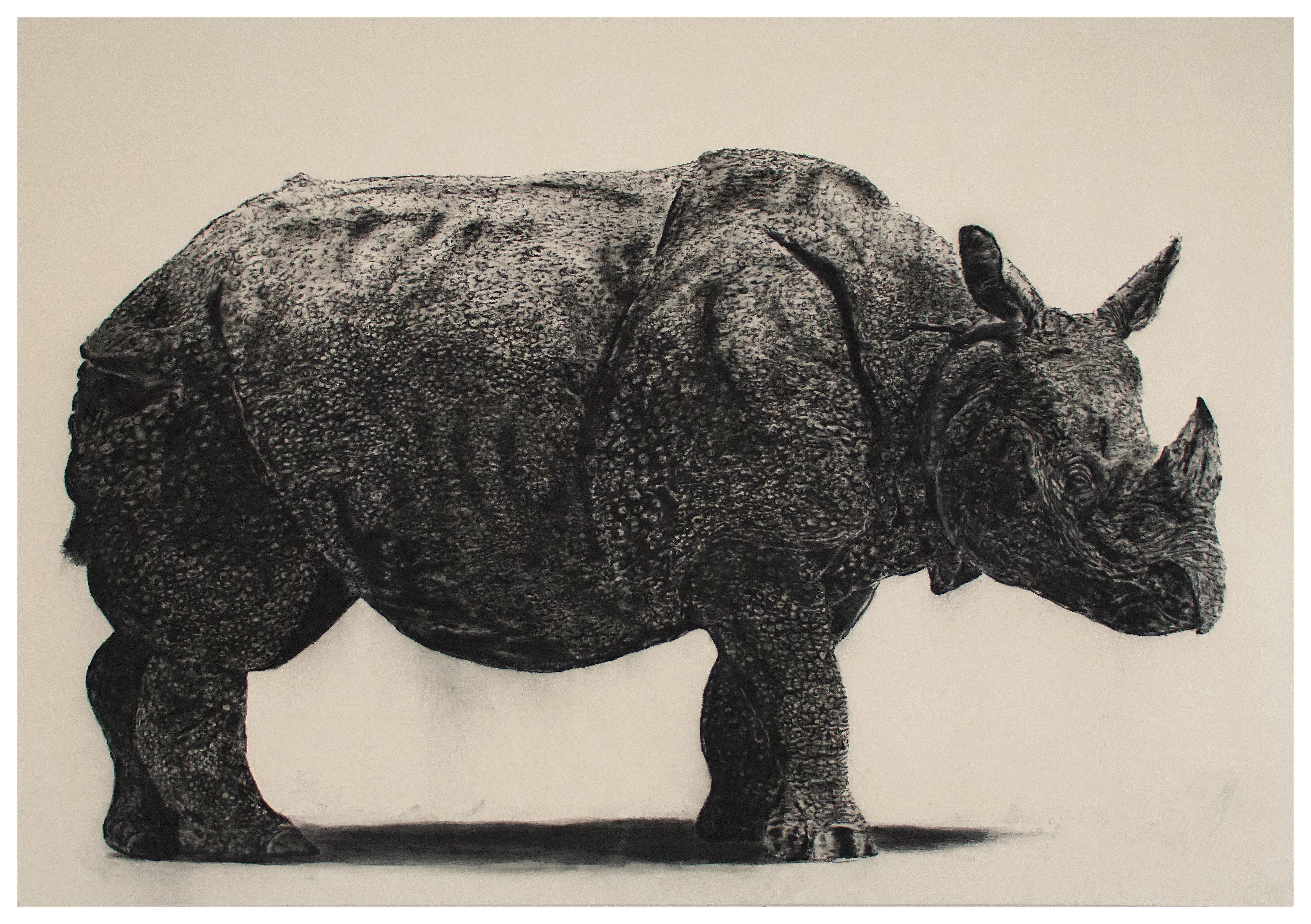